The Toronto real estate market has experienced substantial changes over recent years. Factors including robust economic activity, heavy migration, investment in real estate, and low rental vacancy have put upward pressure on home prices. According to a report from the Toronto Real Estate Board (TREB), the average home buyer would need to pay $256,055 more for a home in July 2019 compared to 2014, an increase of 46% and a price of $806,755.

Additionally, despite federal policies put in place to cool the market, recent data from Zoocasa shows that dramatic price increases have persisted in segments throughout the city.

The study, which determined the difference in average home prices for condos and houses in 35 districts in Toronto, shows that prices have more than doubled in many neighbourhoods, especially in the condo market and areas with prices are lower than the city average.

Here’s a graph of how prices have increased across the City of Toronto during the five-year time span: 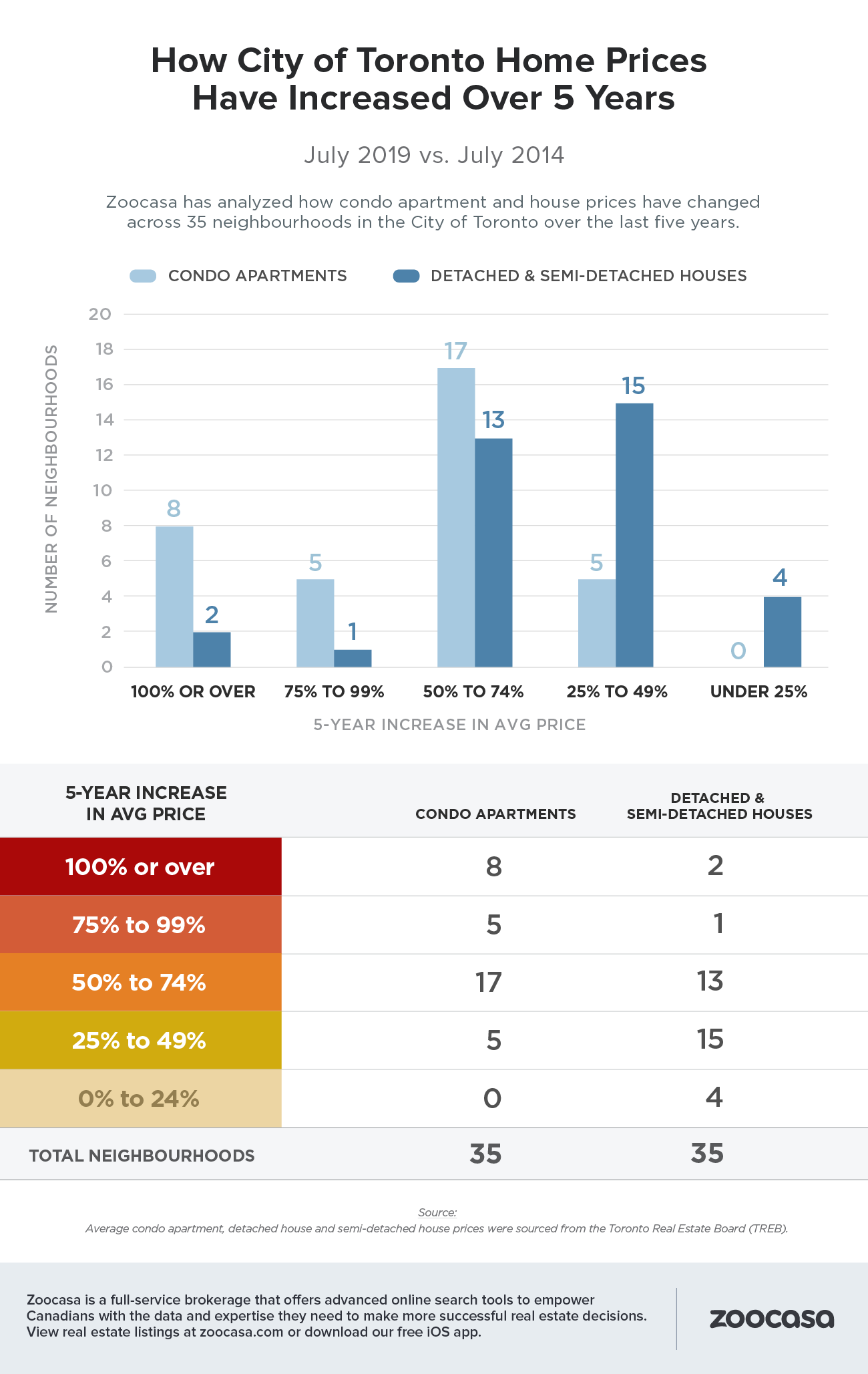 Condo Prices Prompt Concentration in the East and Northwest

Condos have taken the lead with Toronto real estate listings in terms of price growth, with a greater percentage of local neighborhoods experiencing substantial upswings from 2015 & 2019.

Though the overall average condo price increased by 66% to $627,927 over the five years, eight of the assessed neighbourhoods have experienced growth of 100% or greater, while 30 of 35 have seen at least a 50% increase. All markets experienced a minimum uptick of 25%.

It’s no surprise that units located within the downtown area or close to transit systems saw the greatest volume of sales. This included City Place, Cabbagetown, and Mimico, despite being at a higher price range between $520,000 & $711,000.

While this highlights the importance of location to condo buyers, it also demonstrates how affordability has been limited for prospective homeowners, who could have purchased a single-family home in 2014 with the same budget, and have since seen affordability cut by the nationally mandated stress test.

Price growth was less dramatic for Toronto houses, though still robust. The average price of detached and semi-detached houses boosted by 42% over the five-year period to $1,167,968. 15 neighbourhoods experienced a 25 & 49% uptick in prices, while 13 neighborhoods saw a 50 & 74% increase in prices. Only four reported an increase between 18 & 24%, while just three saw increases above the 75% mark.

Of those three, two districts saw prices double & C03, which includes Oakwood and Forest Hill, and C08, which includes Regent Park, Corktown, and St. James Town. However, there are differing elements affecting each area. Conditions are relatively brisk in C03, with 30 sales and 44 listings during the month of July, setting the stage for a thriving sellers’ market at a high point of $2,031,545.

On the other hand, detached and semi-detached houses are in down supply in C08, with just four sales and five listings over the course of the month. That puts immense upward pressure on prices, which land at $1,789,032, despite it being a very small market for single-family housing.

Zoocasa is a full-service brokerage that offers advanced online search tools to empower Canadians with the data and expertise they need to make more successful real estate decisions. View real estate listings, like Etobicoke homes for sale, at zoocasa.com or download our free iOS app.